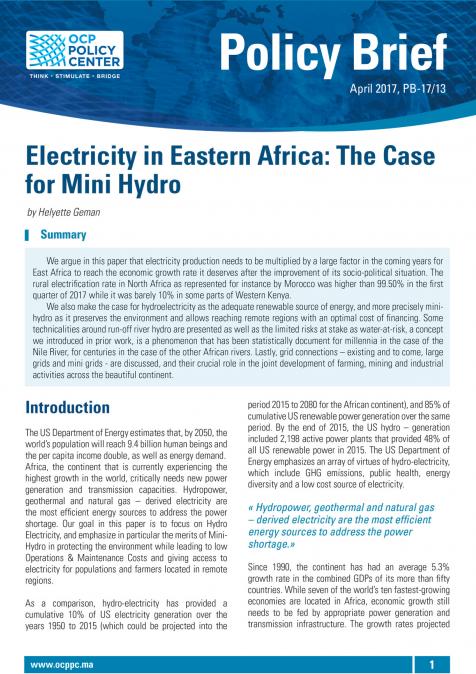 We argue in this paper that electricity production needs to be multiplied by a large factor in the coming years for East Africa to reach the economic growth rate it deserves after the improvement of its socio-political situation. The rural electrification rate in North Africa as represented for instance by Morocco was higher than 99.50% in the first quarter of 2017 while it was barely 10% in some parts of Western Kenya.

We also make the case for hydroelectricity as the adequate renewable source of energy, and more precisely minihydro as it preserves the environment and allows reaching remote regions with an optimal cost of financing. Some technicalities around run-off river hydro are presented as well as the limited risks at stake as water-at-risk, a concept we introduced in prior work, is a phenomenon that has been statistically document for millennia in the case of the Nile River, for centuries in the case of the other African rivers. Lastly, grid connections – existing and to come, large grids and mini grids - are discussed, and their crucial role in the joint development of farming, mining and industrial activities across the beautiful continent.