Share
Energy Markets Amid the COVID-19 Pandemic: What Do We Know So Far?
Authors
Rim Berahab

The COVID-19 pandemic is evolving into an unprecedented international crisis, with serious consequences for human health and economic activity. While it is still too early to accurately determine the magnitude and persistence of the economic impact of the pandemic, a short-term assessment can be made. This short opinion focuses on the implications for energy markets. The rapid decline in crude oil prices has raised concerns on both the demand and supply sides, making the outlook for this market very uncertain. Meanwhile, despite a significant reduction in greenhouse gas emissions in some of the hardest-hit regions, which is very likely to be unsustainable, low fossil-fuel prices could potentially stall significant progress in the development of clean-energy technologies, thus hampering energy-transition efforts.

The extraordinary degree of uncertainty over the potential implications of COVID-19 has triggered a steep decline in energy use worldwide. Oil markets, in particular, have been severely affected. Since the beginning of January, crude oil prices have fallen sharply: Brent and WTI prices fell by about 61% and 66%, respectively, as of March 23, to reach $25.06/barrel and $19.48/barrel, the lowest levels since January 2002 (FRED Database, 2020). Although other factors have contributed to this decline, the impact of COVID-19 cannot be denied. On the demand side, major reductions in refinery production in China because of the rapid spread of COVID-19, combined with a significant decline in transportation and industrial and commercial activity, have led to a substantial slowdown in global oil demand. This slowdown is mainly attributed to China, which in 2019 accounted for nearly 14% of global oil demand and was responsible for more than 80% of the growth in global oil demand (International Energy Agency (IEA), 2020). With China now at the center of global supply chains, any major disruption in its economy is likely to have negative global repercussions. Although the data is far from complete, the IEA estimates that global oil demand in the first quarter of 2020 will decline by 2.5 million barrels per day to 96.6 million barrels per day from 99.1 million barrels per day in the first quarter of 2019.

Another factor, not directly linked to the COVID-19 pandemic, has impeded global energy markets. Oil markets are being disrupted not only by demand concerns, but also by supply concerns and particularly by the price war between Saudi Arabia and Russia. OPEC+ producers (15 OPEC member countries and 10 non-OPEC producers, including Russia) met on March 6 to examine the oil market situation. While the group’s current 2.1 million barrels per day of production cuts is expected to expire at the end of the month of March, a statement issued after the meeting didn’t make any mention of supply restraint, stating only that further consultations will take place. The fact is that Saudi Arabia and Russia failed to reach an agreement about Russian oil supply. In an attempt to stem the fall in oil prices, OPEC has suggested a further reduction in non-OPEC supply of 500,000 barrels/day, with which Russia has refused to comply (IRIS, 2020). The implication, therefore, is that the OPEC+ countries will be free to exercise their commercial judgement when assessing future levels of production. As a result, and as of the date of writing this opinion, Saudi Arabia has announced three important decisions: i) a reduction in crude oil prices in April by six to eight dollars per barrel compared to March, ii) an increase in oil supply volumes to over 12 million barrels/day compared to the current 10 million; iii) an increase in its maximum sustainable production capacity to 13 million barrels/day, compared to 12 million today (IRIS, 2020).

In the face of this unprecedented uncertainty clouding the very short-term outlook for the global oil market, on both the demand and supply sides, it is necessary to monitor the situation closely. The IEA has developed two drastically different scenarios for oil demand. A pessimistic scenario, in which countries already affected by COVID-19 recover more slowly, while the epidemic spreads further in Europe, Asia and beyond, indicates that global oil demand could fall by 730,000 barrels/day in 2020. Another more optimistic scenario, in which COVID-19 is quickly brought under control in China and the most severe contagion remains limited to a few countries, states that global oil demand could, on the contrary, increase by 480,000 barrels/day in 2020. In view of the uncertainty in oil markets, and recalling the collapse of oil prices at the end of 2014, this situation is all the more worrisome for oil-exporting African countries. The decline in 2014 was far from what is being contemplated today, but it had a crippling effect on their economies for years. Therefore, the short-term prospects for the oil market will depend on the resumption of negotiations between Russia and Saudi Arabia, on how quickly governments take action to contain COVID-19, and on the success of their efforts.

What About Renewable Energy Markets?

Following the COVID-19-induced global economic downturn, which has led to the current drop in oil demand, we may well see greenhouse gas (GHG) emissions fall this year. Some projections speak about a global reduction of Carbon Dioxide (CO2) ranging from 0.3% to 1.2% in 2020 (Atlantic Council, 2020), while a recent analysis carried by Carbon Brief reports a CO2 reduction in China of about 25% over four weeks of lockdown. In addition, various images from NASA and European Space Agency satellites show that levels of man-made pollution, particularly nitrogen dioxide, have dropped significantly in China and Europe since the lockdown. However, any decrease in GHG and non-GHG emissions is most likely unsustainable in the long term. It is not the result of governments and companies adopting new policies and strategies, but rather the immediate result of an exogenous shock, which has serious repercussions for the health and economic activity of individuals. Also, the net effect of COVID-19 on GHG emissions, in particular, might not be very significant, since emissions increases from households heating or cooling their homes more may might compensate for the fall. 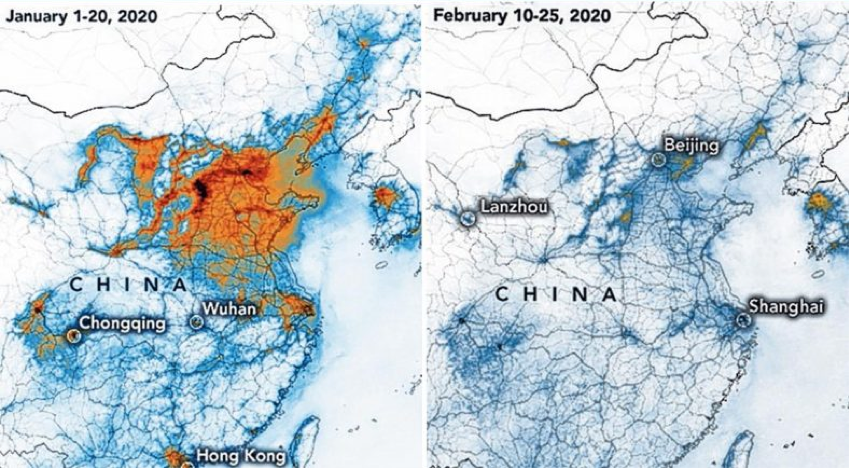 Moreover, the low cost of oil has raised serious questions about the future of clean-energy deployment and climate action. The costs of key renewable technologies are now far lower than during previous periods. For instance, the global weighted average levelized cost of electricity (LCOE) produced by solar photovoltaic (PV) declined by 77% between 2010 and 2018, while that of onshore wind is 35% less now than in 2010 (IRENA, 2019). However, as COVID-19 affects the entire energy supply chain, at a time when renewable energy technologies are taking off, low oil and gas prices could well jeopardize their competitiveness with fossil fuels, hampering the transition to clean energy. Therefore, without proper policy support, the rapid pace at which certain renewable energies have developed will have to slow until credit markets recover, thus ceding ground to cheap hydrocarbons and fossil fuels. In addition, this situation could reduce the impetus for energy-efficiency policies. History and experience have both shown that, in the absence of government measures, cheaper energy always leads consumers to use it less efficiently (IEA, 2020). Moreover, clean-energy transition efforts face another threat. China remains the world's main source of production of many clean-energy technologies, including solar panels, wind turbines, and batteries for electric cars. However, since the Chinese economy has been severely disrupted as a consequence of the government's efforts to contain COVID-19, bottlenecks could be caused in the supply chain for some technologies and components. Now the pandemic has reached other countries in Europe and America, the situation is all the more worrying.

In conclusion, it is very early to determine with confidence the repercussions of the COVID-19 pandemic on energy markets, as the duration and extent of the health crisis are still unknown. However, it is clear that governments and policymakers play a central role in managing the effects of energy-market disruptions on their economies. Their role is all the more crucial in the pursuit of the clean-energy transition. While it is essential for them to draw up plans to curb COVID-19 and counter the economic damage it causes, they must ensure that the essential task of building a secure and sustainable energy future is not lost amid immediate priorities.