Share
COVID-19: a Catalyst for Decarbonization and Integration of the Mediterranean Energy Market
Authors
Silvia Pariente-David

COVID-19 is a serious crisis but it presents several opportunities. The COVID epidemic is having a dramatic impact on the global economy (triggering the worst recessions since the Second World War), the health of the world population and the well-being and freedom of individuals. It is also sparking changes that may have beneficial economic, social and environmental/climate effects. The lockdown imposed in many countries to contain the virus spread has resulted in lifestyle changes, some of which could be long lasting, such as teleworking, shorter food supply chains and relocation of some manufacturing closer to the point of consumption (such as drugs). The interlinkages between COVID-19, energy and climate are complex and somewhat unpredictable. However, in a world where climate change and virus outbreaks do not stop at borders, it is clear that whilst this virus, like previous pandemics, will eventually be brought under control, climate change threats may outlive the pandemic if the planned stimulus packages to boost economic recovery do not incorporate sustainability objectives. Moreover, there are similarities in the way in which the COVID-19 crisis and the climate change threat should be tackled, notably the need for governments across the world to take coordinated action. COVID-19 has also precipitated a major increase in the role of the state. Finally, there is reason for hope because, like many crises, COVID-19 is prompting innovation, creativity, solidarity and a spirit of cooperation, which may bring a note of optimism about the way in which future opportunities will be grasped.

The Middle East and North Africa (MENA) region will be affected by all these trends, especially in areas related to the oil market turmoil. The region has some of the world’s most oil-dependent economies, countries with limited sociopolitical resilience and some of the most vulnerable to changing trade patterns. However, the region also has some assets that can help turn those challenges into opportunities by encouraging economic diversification, a more sustainable development model and a new social contract. In that process, it can benefit from Europe’s support, not only to directly address the COVID-19 crisis but also indirectly because the MENA region can be instrumental in the EU’s quest for carbon-neutrality.

COVID-19 causes a dramatic drop in CO2 emissions, but renewable energy shows spectacular resilience. Oil prices have collapsed under the combined effect of lower demand and over-supply due to lack of agreement between OPEC and the other major oil producers. However, despite those very low oil prices, growth in renewables remains strong. As the economic recession triggers a dramatic fall in energy demand during the lockdowns, fossil fuels are being hit hardest, especially in the power sector, because of their higher variable costs. As a result, the share of renewables in power systems is reaching levels never seen before. On May 11, a historical record for the European electricity system was registered with the share of renewables reaching 54%. Many power system operators are now routinely managing grids with a renewables share as high as 70% or more, a previously unthinkable level. Renewables are gaining in market share, and increasing further as capacity is added despite supply chain disruptions . The COVID-19 crisis has led to more activities being conducted remotely and increased telework with the result that the growing trend in digitalization and electrification in recent years has accelerated. 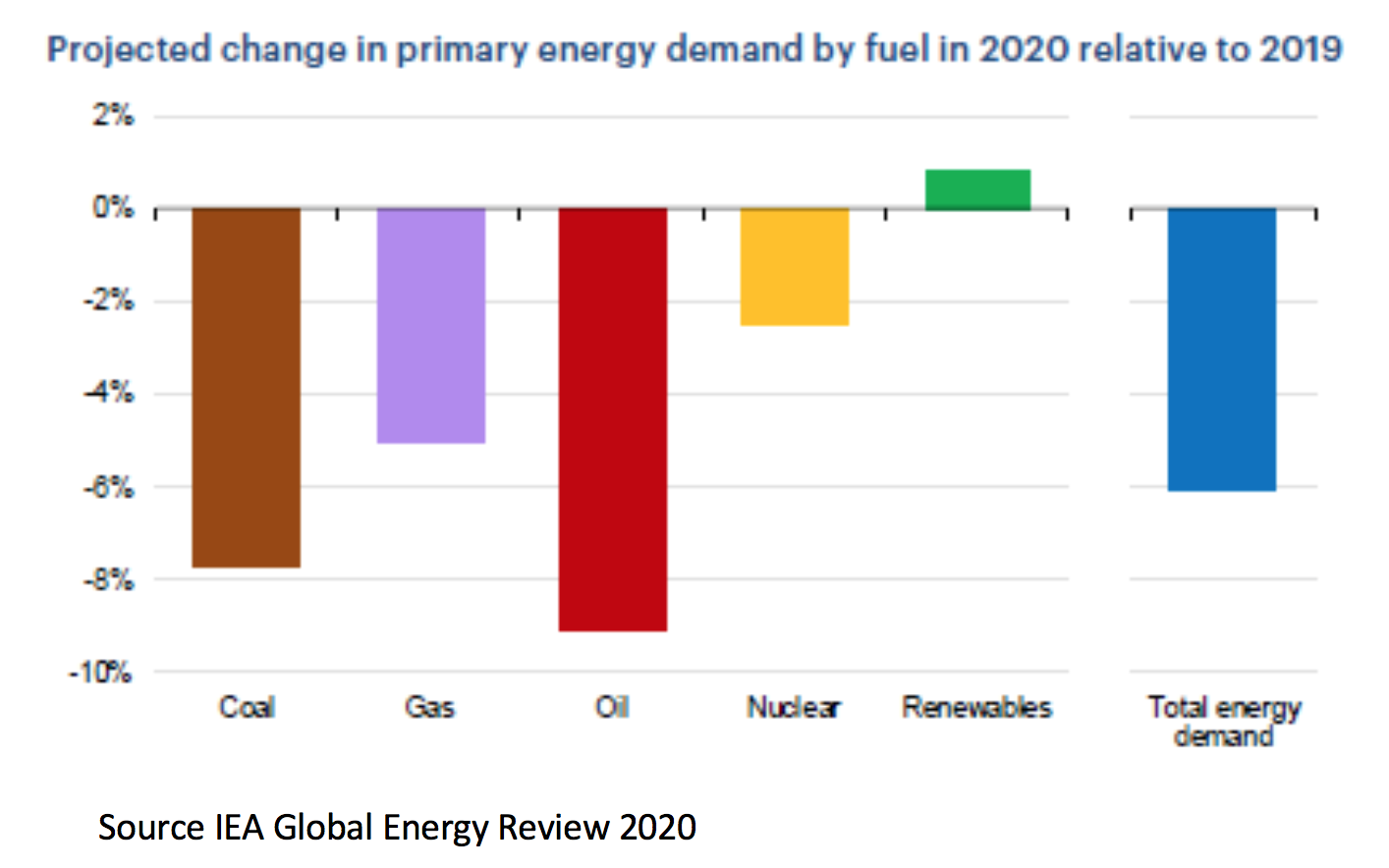 As a result, the coronavirus crisis could cause the largest ever annual drop in CO2 emissions in 2020, more than during any previous economic crisis or period of war. The International Energy Agency has estimated that CO2 emissions could decrease by 8% this year, or 2,600 Mt CO2. The reduction is steepest in the transport sector which accounts for over half the emission reduction. Although it would seem to make the Paris Agreement objectives easier to reach, limiting temperature increases to 1.5°C would require similar annual declines for ten consecutive years. However, the CO2 emission reduction is mostly due to the economic recession and only marginally because of behavioral and structural changes in energy consumption. Therefore, a rebound in emissions will be difficult to avoid and can be contained only through ambitious green stimulus packages.

Green stimulus packages can spur an economic recovery compatible with climate objectives. The COVID-19 crisis has prompted some structural and behavioral trends that are favorable to decarbonization and may outlive the epidemic. For instance, it is possible that forced confinement might lead to a paradigm shift towards teleworking that significantly reduces reliance on cars for commuting. The question now is how to structurally decouple economic growth from emissions so that the economy can recover without inducing an equivalent rebound in CO2 emissions. As nations prepare for the COVID-19 aftermath, there is tremendous opportunity for initiating a low-carbon recovery, and in particular for making energy systems fit to meet the objective of carbon neutrality set by many countries around the world.

In many countries, efforts to provide economic relief and restart growth after the pandemic are well under way. G-20 nations have announced fiscal measures estimated at 11% of GDP — three times the response to the 2008–2009 financial crisis. The European Union is at the forefront of green recovery efforts, and serves as a benchmark for many other countries, with the proposal on May 27 of a Repair and Prepare initiative endowed with a budget of €1.85 trillion to kick-start economic recovery and increase resilience. Companies are also urging governments around the world to align their COVID-19 economic aid and recovery efforts with the latest climate science.

The EU recovery effort is centered around the EU Green Deal, thereby enshrining green transition as the main driver of economic recovery and key to Europe’s future growth and prosperity. The European Commission proposal includes a new recovery instrument, Next Generation EU, with a budget of €750 billion to (1) support investment and reforms in Member States to facilitate green and digital transitions and boost resilience of national economies; (2) incentivize private investments to rescue companies in the most affected sectors and regions and boost resilience of key strategic sectors; and (3) strengthen health security and fund vital research in health, resilience and the green and digital transitions. Part of the budget will be devoted to external action, including humanitarian aid and close cooperation with the EU’s immediate neighbors, so they can benefit from the EU green and digital transition and learn from the EU experience. The Commission proposal singles out renewables and hydrogen as key for deep decarbonization, and therefore being central to the green recovery.

Mediterranean integration is a strong enabler for decarbonization. The objective of carbon neutrality adopted by the European Union requires a massive scale-up of renewable energy, something also embedded in the EU Recovery Plan. However, to accommodate a high penetration of intermittent and variable renewable energy, power systems need increased flexibility, as electricity cannot be stored easily and therefore the power system needs to be balanced in real time. According to the International Energy Agency, flexibility is the ability of a power system to reliably and cost-effectively cope with the variability and uncertainty of demand and supply across all relevant timescales, from ensuring instantaneous stability of the power system to supporting long-term security of supply. Two key solutions to increase flexibility are storage (batteries, thermal storage, pumped hydro, etc.) and regional market integration through interconnections. Whereas storage addresses the time dimension of flexibility, regional market integration is directed at the spatial dimension. It is easier to balance in real time a large power system with vast quantities of intermittent renewables, as wind is always blowing and sun shining somewhere. 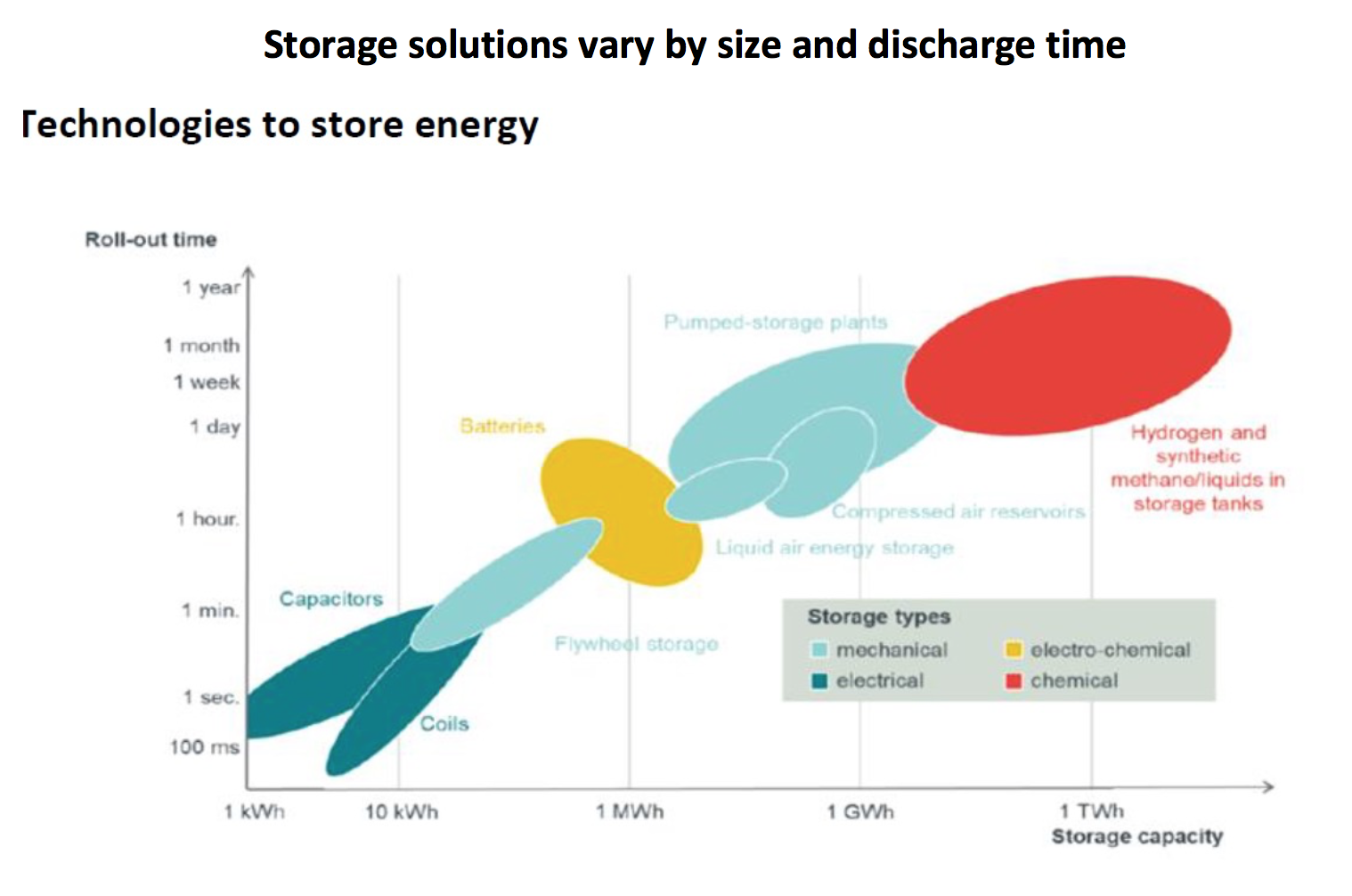 Integrating the EU single electricity market, through the Mediterranean, with markets in Africa, the Middle East and South East Europe (including Turkey) would not only increase power system flexibility in the interconnected countries, but would also give the EU access to a vast and almost unlimited reserve of carbonless energy. Indeed, the demographic, climatic and geographical conditions of the MENA region give it significant advantages in terms of large-scale renewable energy development, such as plentiful low-cost solar energy resources and ample desert land to site solar power plants.

Hydrogen will be part of Mediterranean energy market integration. Reaching carbon neutrality requires more than renewable energy alone. Resorting to renewable energy requires intense electrification for final energy use as very few end-use processes and equipment can use renewable energy directly. However, some sectors are difficult to electrify, such as cement manufacturing and some segments of the transport sector (maritime and air transport, long-haul commercial road transport, etc.). Hydrogen can be used as an alternative energy carrier to decarbonize those end-use sectors, also known as indirect electrification. “Green” hydrogen can be produced by electrolysis of water using renewable-based electricity with no carbon emissions. Hydrogen is then substituted for fossil fuels in end-use sectors, either directly or through fuel cells, with no CO2 emissions.

In addition, hydrogen can be used for storage and therefore increase the flexibility of power systems. Excess renewable energy can be used to produce hydrogen, thereby avoiding curtailments, which can then be stored and transported, and later turned into electricity where and when the electricity is needed.

The New Industrial Strategy Communication, under the EU Green Deal, proposes the creation of a European Clean Hydrogen Alliance, modelled on what was done for the European Battery Alliance. The EU Recovery Plan  proposes a budget of up to €30 billion for clean hydrogen. Although the EU sees the development of hydrogen as key to achieving carbon neutrality, it recognizes that not all the required volumes can be generated within Europe without CO2 emissions. North Africa, as well as the rest of the MENA region, has been identified as a location that could supply Europe with green hydrogen. The MENA Hydrogen Alliance, created in January 2020, brings together the private and public sectors and academia to promote the development of hydrogen in the MENA region.

Morocco has many key assets for becoming a major player in the emerging hydrogen market, such as its proximity to Europe, a very large local market that uses hydrogen in ammonia production for the fertilizer industry, ample electricity and natural gas infrastructure, including for exports, which is largely underutilized, plentiful renewable energy resources to produce electricity for the electrolysers, etc. The country has set up the National Commission on Green Hydrogen to steer an ambitious green hydrogen development and export program. Various studies have been conducted, a roadmap is in preparation, and pilot projects to produce green ammonia are being set-up.

Dr Silvia Pariente-David is a senior advisor and energy consultant on energy and climate change issues to several international financial institutions, governments, think-tanks, international organizations and energy companies. Previously, she was Senior Energy Specialist at the World Bank where she led the team arranging financing of the Ouarzazate solar power plant. Much of her work focuses on optimization of renewable energy integration into the power systems. She also has a keen interest in the creation of an integrated Mediterranean energy market and contributes regularly to analysis of interconnector projects to improve regional electricity market integration.