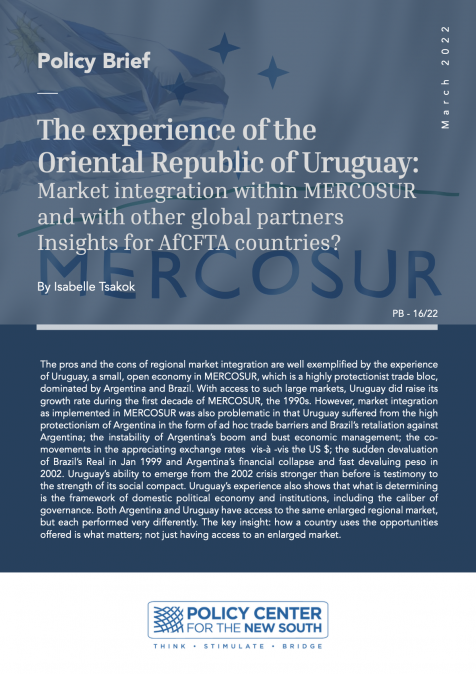 Download PDF
Share
The experience of the Oriental Republic of Uruguay: Market integration within MERCOSUR and with other global partners Insights for AfCFTA countries?
Authors
Isabelle Tsakok

The pros and the cons of regional market integration are well exemplified by the experience of Uruguay, a small, open economy in MERCOSUR, which is a highly protectionist trade bloc, dominated by Argentina and Brazil. With access to such large markets, Uruguay did raise its growth rate during the first decade of MERCOSUR, the 1990s. However, market integration as implemented in MERCOSUR was also problematic in that Uruguay suffered from the high protectionism of Argentina in the form of ad hoc trade barriers and Brazil’s retaliation against Argentina; the instability of Argentina’s boom and bust economic management; the co- movements in the appreciating exchange rates vis-à -vis the US $; the sudden devaluation of Brazil’s Real in Jan 1999 and Argentina’s financial collapse and fast devaluing peso in 2002. Uruguay’s ability to emerge from the 2002 crisis stronger than before is testimony to the strength of its social compact. Uruguay’s experience also shows that what is determining is the framework of domestic political economy and institutions, including the caliber of governance. Both Argentina and Uruguay have access to the same enlarged regional market, but each performed very differently. The key insight: how a country uses the opportunities offered is what matters; not just having access to an enlarged market.