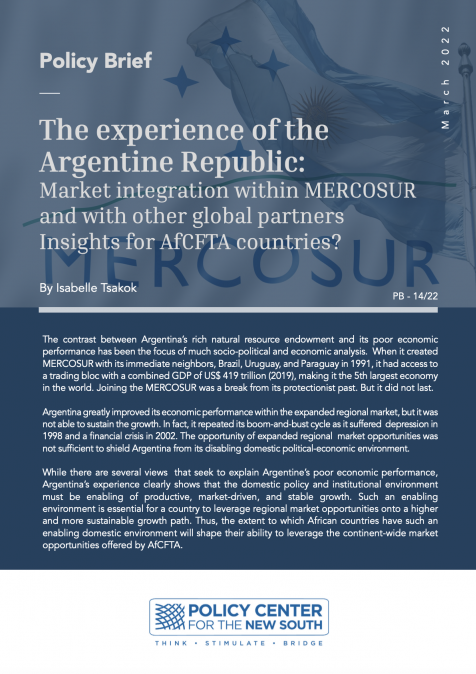 Download PDF
Share
The experience of the Argentine Republic: Market integration within MERCOSUR and with other global partners Insights for AfCFTA countries?
Authors
Isabelle Tsakok

The contrast between Argentina’s rich natural resource endowment and its poor economic performance has been the focus of much socio-political and economic analysis. When it created MERCOSUR with its immediate neighbors, Brazil, Uruguay, and Paraguay in 1991, it had access to a trading bloc with a combined GDP of US$ 419 trillion (2019), making it the 5th largest economy in the world. Joining the MERCOSUR was a break from its protectionist past. But it did not last.

Argentina greatly improved its economic performance within the expanded regional market, but it was not able to sustain the growth. In fact, it repeated its boom-and-bust cycle as it suffered depression in 1998 and a financial crisis in 2002. The opportunity of expanded regional market opportunities was not sufficient to shield Argentina from its disabling domestic political-economic environment.

While there are several views that seek to explain Argentine’s poor economic performance, Argentina’s experience clearly shows that the domestic policy and institutional environment must be enabling of productive, market-driven, and stable growth. Such an enabling environment is essential for a country to leverage regional market opportunities onto a higher and more sustainable growth path. Thus, the extent to which African countries have such an enabling domestic environment will shape their ability to leverage the continent-wide market opportunities offered by AfCFTA.