The launch of an oil futures contract on the Shanghai International Energy Exchange (INE) cannot be merely seen as a “technical” or secondary event, as it foreshadows what global commodities markets will become in a few years. The Shanghai Futures Exchange (SHFE) and the Dalian Commodity Exchange (DCE) have, indeed, seen their trading volumes increase significantly over the past decade thanks to steel and iron ore, which could suggest that the move is, in fact, not that unprecedented. In terms of the volume of traded contracts, these two exchanges compete with the two giants of the sector: the Chicago Mercantile Exchange (CME), and the Intercontinental Exchange (ICE). While this statistic is not fully representative of their actual respective activities – based on an open-interest analysis, i.e. the number of contracts that have been bought or sold and not yet subject to resales or buy-backs offering strikingly different conclusions – it still fully reflects their economic significance, at least at the local level. Notwithstanding, the point isn’t this.

Table 1: Major Commodity Exchanges in 2016 (in volume of traded futures)

China is, by far, the largest steel producer in the world (831.7 million tonnes in 2017, according to the group Worldsteel). It shouldn’t, therefore, be surprising that Beijing would focus, as it has been doing, on promoting the development of national price-risk management instruments specifically for this industry, both upstream and downstream. Futures on reinforcing rods and iron ore negotiated on the SHFE and the DCE, respectively, thus asserted themselves – for some years now already – as global steel-market barometers that “cast iron” operators can’t do without. 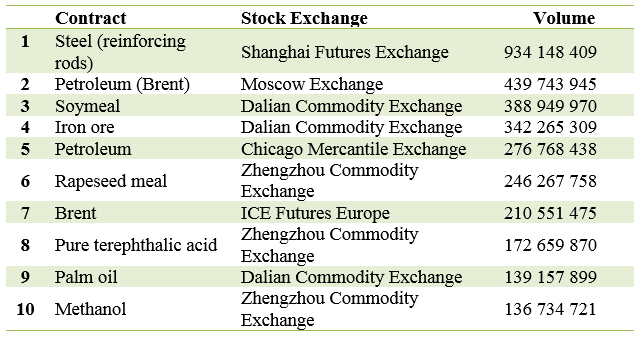 The Shanghai International Energy Exchange (INE) contract is also logically devised to meet the needs of the Chinese economy: with a size of one thousand barrels per lot, monthly quotations on the forthcoming year and quarterly quotations on the two subsequent years, the possibility of physical delivery of the underlying – light sour crude oil (with an API gravity of 32 degrees and a sulphur content of 1.5%, allowing delivery of crude oil from the Middle East and China: Dubai, Upper Zakum, Oman and Qatar Marine, as well as other sources, in return for a premium or a discount: Masila, Basrah Light, and Shengli) – in correspondence with the expectations of Chinese refiners  and denominated in yuan. The will to promote such “national” instruments, however, is not exclusive to China: In 2016, a Urals and Volga  oil contract was also launched by Russia on the Saint Petersburg Stock Exchange (SPIMEX).

So what is so special about the INE-proposed contract? The answer to this question is multi-pronged. Although this futures contract is quoted in Chinese currency, with American currency being accepted for the initial deposit and margin calls, it is meant to be handled not by Chinese operators only, but also by international producers and traders. The aim is to make this contract a price benchmark in yuan, in the same way that Brent (London) or West Texas Intermediate are benchmarks in dollars. Glencore and Trafigura have taken part in the initial negotiations after the contract launch on 26 March of this year, which was perceived as a very positive sign. Note that numerous derivatives traded on organised markets are not enjoying the kind of success one would expect;  whereas they are often promoted by producing countries, they also ought to have what it takes to elicit the interest of all stakeholders in the sector, foremost among which are trading houses, as well as speculators. If it is appropriate, therefore, to be cautious about the future prospects of the Chinese contract, it should be acknowledged that a number of prerequisites have already been fulfilled. Yet, many years will still have to pass for this futures contract to self-assert on the international scale; eroding the “power” of the WTI or Brent is certainly a long-term endeavour.

Diagram 1: Mechanisms of “Assertion” of a Commodity Futures Contract 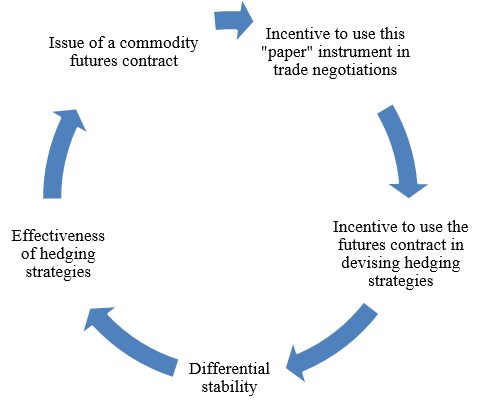 As such, it is sometimes argued that the ultimate goal of such a futures contract is to allow China to have clout on crude-oil prices. This statement is not wrong, but it lacks in precision. As part of a commercial negotiation, pricing of a commodity is often based on a benchmark price that is considered objective by both contracting parties. This benchmark may be either proposed by an agency such as Platts, ICIS, or CRU (among others), or derived from a stock price such as the one proposed by INE. This price, which should be manipulation-proof, transparent, and observable by all without cost or delay, offers a number of advantages that explain why the financialisation of commodity markets is a phenomenon gaining traction (see also the report published by the OCP Policy Center: “The Financialization of Commodity Markets: A Short-Lived Phenomenon?”). This does not mean that the commercial price is equal to the “on-paper” price, but that the former is processed by differential with respect to the latter. This differential contributes to market adjustments and thus continues to evolve, yet its stability is fundamental to ensuring the efficiency of hedging strategies aimed at protecting the sector’s operations against price risk. In other words, it is the benchmark price, not the differential, that must capture the bulk of supply-and-demand shocks, for it to be adopted by industrial operators both commercially and financially (Diagram 1). Therefore, by promoting a futures contract such as the one by INE, China, as Russia previously attempted, aspires to ensure that this differential will be stable for its industrial actors, giving them a considerable commercial advantage.

China’s development of such a futures contract cannot be considered in isolation. Firstly, this contract would be closely tied to the international currency status that the yuan is likely to seek in the coming years. To be sure, the stacking of physical and paper positions, as imposed by a hedging strategy, is greatly facilitated when the same currency is used for both types of transaction. Secondly, if this Chinese “offensive” on crude oil proves successful, it will probably not be the last one; it is very likely that similar initiatives will follow, namely in the minerals and metals segment. This is why the INE initiative deserves attention, because it most likely foreshadows what commodity financial markets – both Anglo-Saxon and Chinese – will be like in just about a decade from now.