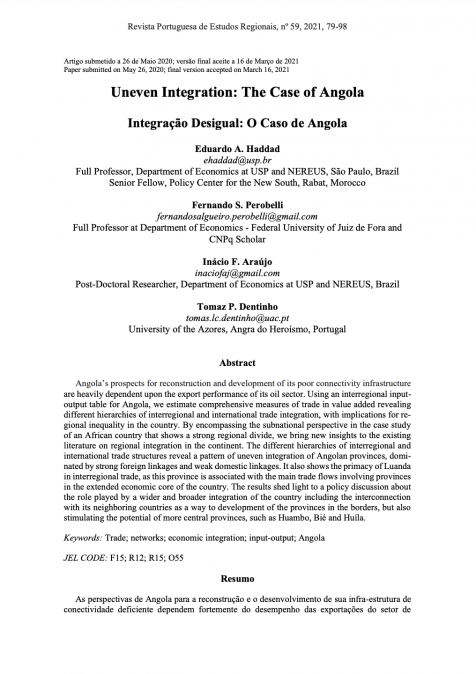 Angola’s prospects for reconstruction and development of its poor connectivity infrastructure are heavily dependent upon the export performance of its oil sector. Using an interregional inputoutput table for Angola, we estimate comprehensive measures of trade in value added revealing different hierarchies of interregional and international trade integration, with implications for regional inequality in the country. By encompassing the subnational perspective in the case study of an African country that shows a strong regional divide, we bring new insights to the existing literature on regional integration in the continent. The different hierarchies of interregional and international trade structures reveal a pattern of uneven integration of Angolan provinces, dominated by strong foreign linkages and weak domestic linkages. It also shows the primacy of Luanda in interregional trade, as this province is associated with the main trade flows involving provinces in the extended economic core of the country. The results shed light to a policy discussion about the role played by a wider and broader integration of the country including the interconnection with its neighboring countries as a way to development of the provinces in the borders, but also stimulating the potential of more central provinces, such as Huambo, Bié and Huíla.