After reaching a peak against other currencies in March this year, the dollar fell by almost 15% until the beginning of December. According to Bloomberg, asset portfolio managers have been assuming "short" positions against the dollar, that is, betting on its fall ahead. The dollar is expected to devalue against the euro, the yen, and the Chinese RMB in 2021.

The peak last March, during the coronavirus financial shock, reflected the search for a safe haven in short-term US bonds or cash that happens in times of heightened global aversion to risk. The dollar rose almost 10% in the first quarter of the year. The mood improvement in the subsequent months reduced the search for safety. There is currently a convergence of views that, gradually or not, US current account deficits and insufficient domestic savings tend to slide down the relative value of the dollar – see, e.g., Roach (2020) and Rogoff (2020).

This is good news for emerging economies this year, judging from an essay by Boris Hofmann and Taejin Park included in the Bank for International Settlements (BIS) quarterly report released last week. Loose financial conditions and sustained expansion of global credit favor growth on the real side of emerging economies, with the presence of the dollar as an influential factor in this transmission. According to the authors' estimates, a shock of 1% appreciation of the dollar against a wide basket of other currencies reduces by 0.3 percentage points the economic growth of a group of 21 emerging countries that they consider. One may expect an impact in the opposite direction in the event of a devaluation of the dollar.

The authors highlight four “channels of dollar transmission” to explain the negative correlation between the dollar's strength and the growth of the global economy. First, the demand for the currency reflects, as a barometer, the situation of the global appetite for risk by investors. When the latter collapses, the search for refuge raises the price of the dollar, at the same time as capital outflows and worsening financial conditions at the origins are witnessed, in addition to retraction with respect to higher-risk assets and clients. The dollar rises, while the level of economic activity tends to fall.

Second, there is a mismatch between currencies on the sides of liabilities and assets in global credit in dollars outside the United States, the dimensions of which are considerable. When the dollar falls, balance sheets in which liabilities decline relative to assets in other currencies become better. The supply of credit, in turn, increases due to the improvement in risk assessment. This tends to happen even with short-term trade finance.

Third, something in the same direction occurs in the markets for government bonds in local currencies, not least because global investors who carry securities from various countries adjust their portfolios according to the risk conditions of the group as a whole. It is interesting to note that the authors mention a study showing that changes in the dollar against a broad set of currencies weigh more, for securities markets in local currency individually, than changes in the value of the country's own currency against the dollar.

The fourth channel of dollar transmission is via foreign trade. A devaluation of the dollar tends, of course, to negatively affect competitiveness in relation to dollarized economies on the part of those who have their currencies appreciated. However, particularly in cases where invoices are determined in dollars, there is price rigidity in the short term. This is a significant issue, as addressed by the current chief economist of the International Monetary Fund, Gita Gopinath, back in 2015.

Now, these four channels are particularly relevant in the case of emerging economies. Despite the “deepening” and development of financial systems of these countries in recent decades, including the expansion of local-currency securities markets, their financial systems still do not have the density of those in advanced economies and are dependent on external financing. It is not by chance that they have relatively high dollar-denominated debt (Chart 1, left-hand panel) and a significant presence of foreign investors as holders of local currency sovereign bonds (center panel). When the availability of sources of foreign exchange hedge is not adequate, local borrowers of dollar funds and external buyers of local currency securities tend to be exposed in relation to exchange rate variations. Finally, dollar trade invoicing is more widespread in emerging market economies than in advanced economies (right-hand panel). 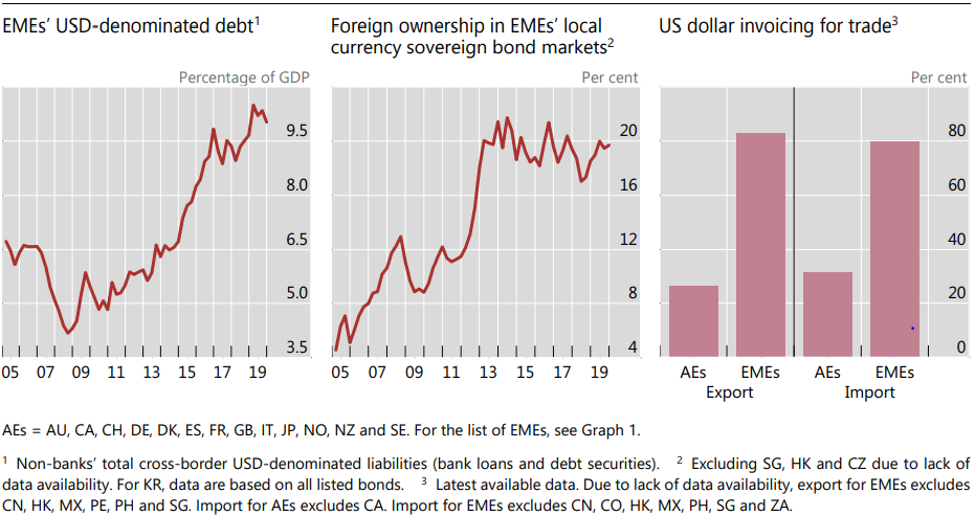 As long as a downward shift in the dollar ahead is not abrupt, while low interest rates in advanced economies and abundance of global liquidity continue, its transmission via financial channels to emerging economies in general tends to be favorable in the near future.

The weights of the four channels differ by country. For instance, while the trade relationship with the United States and the fourth channel matter a lot to Mexico, the financial transmission channels are more powerful in the case of Brazil. Overall, the BIS authors' estimates point to a gain.

It is worth keeping in sight the weight of domestic, country-specific factors. In the experience of the negative financial effect of the appreciation of the dollar in May 2018, it was not by chance that Argentina and Turkey were captured by the storm, due to their particular vulnerability to dollar fluctuations. In Brazil, the possibly favorable tide from abroad will only be taken advantage of if the domestic fiscal mooring is firm.