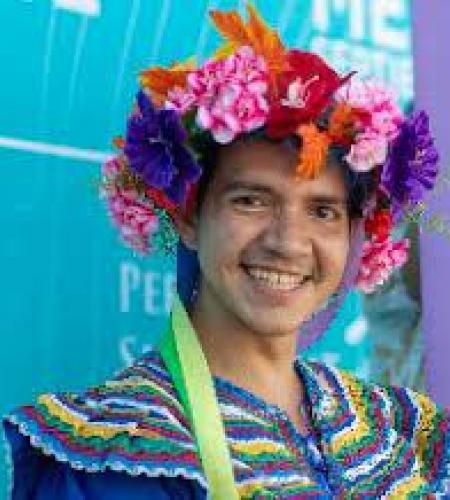 He is a young man like no other. One can spot him easily in a crowd by the way he dresses and addresses the issues with which he is concerned. Leonardo Párraga, an award-winning social entrepreneur and alternative education activist, was born in Colombia with the soul of an artist. He writes poetry, engages with photography, and finds inspiration in the writings of Walt Whitman, whom he describes as the poet of “interconnectedness”.

At 25, he left Bogotá for Harvard University, for a Master’s program in International Education Policy. At the time, he had already spent five years working on “how to create community engagement through non formal education”, he explains. He wanted to complement his experience with the arts and creative thinking, and “explore how education can foster peace in the Colombian context”. He also felt like being part of an international network of practicioners in his field, to help him “get other insights on how to foster social change and activism in a more effective way”.

Since his year spent in Harvard, he has been traveling a lot, but has been fully back in Bogota since 2019. He launched the BogotArt Foundation in 2013, to conduct work at the intersection of art and community development in vulnerable neighborhoods. In 2016, his team started to expand through partnerships, working on transformation in a neighborhood “through creativity, diverging thinking and self-knowledge”. That was the year Leonardo Párraga became an Atlantic Dialogues Emerging Leader (ADEL), and travelled across the Atlantic to Marrakech to take part in the Policy Center for the New South’s young professionals program and flagship conference, the Atlantic Dialogues. There, he found a unique “kind of network” with young professionnals from all horizons. “Usually, networks are really specialized, but this was different, something magical and enlightening. I learned about South-South cooperation, something I had not seen before with direct connection between Africa and Latin America”.

Towards peace and reconciliation

The BogotArt Foundation has now reached a third stage, looking for ways of achieving peace and reconciliation. It launched a campaign called Cartas por la Reconciliación (Letters for Reconciliation), with two other organizations, the Junior Chamber International and Youth for Youth Foundation. “We realized we could bridge the gap between citizens and the FARC ex-combatants, to connect them and help to dismantle stereotypes and labels about the other, that generate hatred and negative feelings”, Leonardo Párraga recalls. More than 5 000 people participated, in the broader context of the implementation of a peace agreement. Four field visits were also organized for 500 people into FARC strongholds, in order to have “face to face conversations”.

This campaign, thanks to its large visibility in the media, allowed the Colombian people to “notice the importance of reconciliation and of generating spaces to interact with one another”, he says. It nurtured the global policy paper “We are here”, a United Nations study on the role of youth in peace processes, where the willingness of society at large to welcome back ex-combatants of armed groups such as FARC was highlighted. He received the Youth Carnegie Peace Prize in 2018 and was named the Youth Ambassador of the Peace Palace in the Netherlands. In 2019, he was awarded the 1 Billion Acts Hero Award during the Nobel Peace Laureates Summit in Mexico, and was part of the ADEL alumni delegation to the Paris Peace Forum. In December 2019, he also came back to Marrakech to address the 2019 ADEL Cohort about the importance of collective memory in the reconciliation process.

A new campaign: Letters for Healing

The Covid-19 crisis has brought about an opportunity for further engagement, and has led Leonardo towards a new campaign, Letters for Healing, to help others cope with the crisis. With two international partners, he intends to connect people suffering from the crisis with messages of support and understanding, sent by people from all over the world. The recipients, spread across Colombia, Mexico and Spain, will be health practicioners, essential workers in supermarkets, delivery and cleaning services, but also infected people and their family members. Formally launched on May 22nd, 2020, the campaign seeks to improve mental health in this tough period and aims at sending 20 000 letters by the end of the year.

Inspired by the Dalai Lama and Desmond Tutu for their work on peace and reconciliation, he also mentions Martin Luther King and his letter from the Birmingham jail, as a “powerful way to transform and give perspective on a new kind of society”. The singer Nessi Gomes catches his attention with the song All Related, about how much human beings are interconnected and can only thrive together. “If we were more mindful of the consequences that our actions have in our environment, we would reduce the harm we do to the world”.