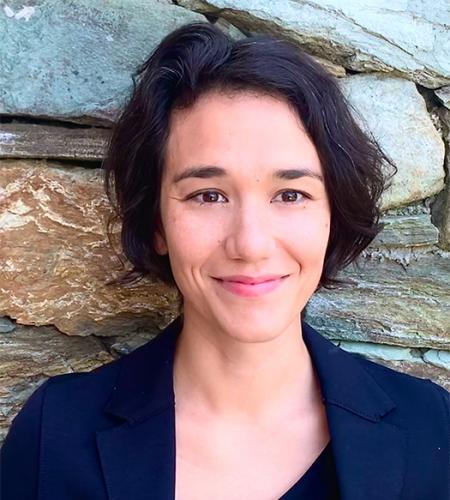 This political analyst, expert in security issues and international development, describes her personality as “down to earth, curious”, and not taking herself “very seriously”. Born in Seattle, half German and half Korean-American, she was raised “between three cultures”. After a decade living and working abroad in Rwanda, China, Afghanistan, the UK, and Myanmar, she is now based in Berlin. She’s fond of cooking and a “beer nerd” – her German side, definitely.

This 36 years old political analyst for DW News, the global news channel of German public broadcaster Deutsche Welle, and founder of CoStruct, a consulting firm, has an impressive record. Not of the least is her TEDx Talk about the transatlantic democracy crisis. “My career and life have been quite global, she says. I work with organizations from across the world and across the public and private sectors.”

A strong drive to be her own boss

Her firm, CoStruct, has supported nonprofits, foundations, investment funds, and government agencies with strategy and program design. Jessica is also supporting partnership development in Europe, Asia and the Middle East and serves as Vice Chairman of the Board for a pan-African fintech company.

She has a strong drive to be her own boss and have firm belief in what she does. When friends ask her if she’s ever going to go back to a good job in some big institution, she laughs. “I became my own boss because I saw the need for people who can think and act outside of silos, who work between institutions to fill the gaps and connect the dots.”

As a member of the advisory board of Europa Nova, a think tank based in Paris, she’s analyzing the security policy of Europe and the Transatlantic alliance, an organization “at a turning point”, she says. “We struggle to redefine ourselves in the 21st century because our systems and thinking are still based on 20th-century assumptions. Now that I’m back in Europe, it’s important for me to contribute to challenging those assumptions, strengthen collaboration between my home countries, and bring a global perspective to our internal debates. Germany and the US need each other, and the world needs us to evolve faster.”

“A masterclass in how not to do things”

It takes a little while for Jessica Berlin to open up and tell her story. It’s only when asked which travels made the biggest impression on her that she speaks of Afghanistan, the root cause of her free positioning in life. “A country so beautiful and with such wonderful people, but failed and betrayed for so long by its own leaders, neighbors and the international community”. She describes as a “turning point” her stay in Mazar-e Sharif and Pul-e Khumri from 2011-12, where she was working for an international development agency.

“What I saw was truly a masterclass in how not to do things. The most concerning in my view was the readiness, even when issues were flagged, to continue with bad strategies and decisions that we knew did not work.” To stay in this sector seemed comfortable but unconscionable: “You’re paid very well and seen by some like a combination of James Bond and Mother Teresa, she laughs. But if I know I am part of the problem I am supposed to solve, then I can’t stay in good conscience”. Her gut feeling was to leave, not really knowing what would come next.

Another trip that left a strong impression on her, for the opposite reasons, was in Cape Town, South Africa. “I spent a winter seminar at the University of Cape Town as an undergrad and fell in love with this city constantly recreating itself, so diverse, with so many cultures coming together.”

Jessica Berlin applied to the ADEL program in 2017, after somebody in the German Marshall Fund sent her some information. “It was transformative: the people, the network, brilliant and diverse minds. They have been part of my life since 2017. My ADEL friends and colleagues around the world are doing incredible work.”

She loves nature, feels happy anywhere with mountains and the sea, and speaks highly of one of her latest reads – A Fistful of Shells : West Africa from the Rise of the Slave Trade to the Age of Revolution, by Tony Green. “This history book has been written by a professor who gathered primary sources about West African pre-colonial global trade and political relations that had been dispersed in archives around the world, as well as oral histories that had been excluded or overlooked in past research.”

She also mentions The Dawn of Everything, a New History of Humanity, by David Graber and David Wengrow, a book on prehistory ripping apart all kinds of stereotypes about our ancestors living in caves and hunter-gathering, through the latest research about how societies were structured before agriculture. “This book tells how diverse and sophisticated prehistoric social models already were, how civilization grew out of what came before. This research is very interesting, I learned things I didn’t even know I didn’t know. In the policy space, we need to question our assumptions more. We too often view history and causality through lenses that limit our visions for the future. We think we know where we come from and where we’re going, but we don’t. We’ve just started scratching the surface.”