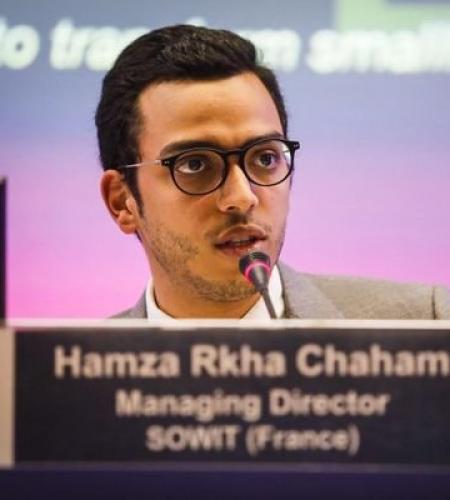 After completing his studies abroad, Hamza Rkha co-launched a start-up in 2018 with an associate, at 27 years of age. Their company, named SOWIT, is based in Casablanca, Dakar and Paris. It provides data-based decision support tools to African farmers. Through an App and processed satellite images, it helps optimize irrigation, fertilization and phyto-sanitary situations.

“We work exclusively in Africa, says Hamza Rkha, with products designed for the weak connectivity of old generation telephones, situations of water stress in North Africa and much needed fertilizers in West and East Africa”. Access is also key. The basic subscription costs 10 euros yearly per hectare, and more if a farmer expresses several needs. In 2020, SOWIT’s growth continued despite the pandemic and covered 45 000 hectares, mainly in Morocco, Tunisia, Ethiopia and Senegal. Its aim is to keep expanding in Côte d’Ivoire, Nigeria and Kenya, with solutions crafted for local needs.

A special love for the countryside

As a child, Hamza Rkha dreamt of becoming a farmer with some livestock, to be able to offer his family a sheep for the Eid Al-Adha feast. Some of his relatives live from agriculture, but his parents are city people. “I spent maybe 10 % of my time in the fields, but it was always the most intense time for me”, he recalls.

This young man, now aged 30, has worked for Danone in New York, Roland Berger Strategy Consultants in Paris and Parrot, the leading European civil and professional drones manufacturer. He served as an international business developer, developing the company activities in Africa, the Middle East and South-East Asia.

His experience spans across 15 countries on the continent. Instead of boasting about it, he humbly shares that he “ was always surprised with the ability of farmers to absorb information, even when they are not so specialized, like a civil servant in Accra who has a field of mango trees or a small pineapple plantation”.

Why did he pick HEC Paris to finish his studies, after a year in Austin, Texas? “It was the only school allowing me to train partly in Africa – and I spent 2016 at Wits University in Johannesburg to enjoy the culture”. He also found “very interesting” subjects in his prep class, such as geopolitics, geography and history. “My aim in France was to travel as much as possible, discover things and be on the ground”.

On the ground is exactly where he came across the ADEL program. Seyi, a young Nigerian farmer he met and trained in Zambia, an ADEL Alumnus himself, advised him to apply. “I was also interested in getting back in touch with geopolitics and international relations, a world I had left with SOWIT”.

As a member of the 2018 cohort, he remembers fondly the “beautiful encounters with researchers and good times with fellow young leaders, to simply understand people from different African, European and American backgrounds”. Another side of the program he enjoys: the lasting links and contacts it offers, long after the Atlantic Dialogues conference.

Hamza’s role models are “simple and unknown people who live detached from the material world, like an old man you may come across on the other side of the street, who has devoted his life to a specific craft for 50 years with patience and respect, and who gets his strength and charisma from understanding that we are nothing”. He finds it difficult to find such character traits among the mighty and the famous, but mentions Nelson Mandela and Alexandre Soljenitsyne, “because they have seen the world and stayed the same for decades”.

Besides Balzac, Maupassant and other novelists who describe the “mechanic of human relations”, Hamza reads history books such as Abdellah Laroui’s History of the Maghreb and is inspired by autobiographies of “people like Gandhi, who did good around them, with greatness and humility”.