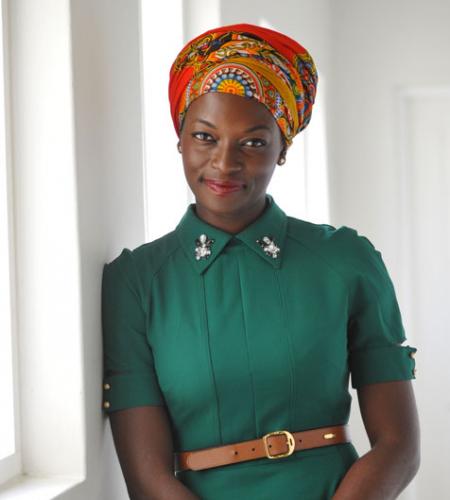 This young woman comes across as a striking beauty, body and soul. Born and raised in Enugu, Nigeria, she shines. She’s not only a voice for others, but first and foremost her own person. She founded She ROARs in 2016, a platform dedicated to unleash the potential of young female leaders in Africa and the diaspora. It really took off after an important gathering of more than 300 African women in August 2017 in Dar-Es-Salaam, Tanzania. The “Women Advancing Africa” conference was organized by the Graça Machel Trust, named after the former First Lady of Mozambique and widow of Nelson Mandela.

“I was invited as one of the core moderators to anchor the event, Chidiogo Akunyili remembers. I thought it was a shame to come all this way and not take advantage of the capacity of so many women gathered in the same place, besides the regular talks. I thought: what if we did something different, something bolder? We had a moment of 300 women sobbing after sharing some very personal stories, opening up to different types of violence they had endured. The need to connect, take time to breathe and realize that you are not alone was overwhelming.”

She was so inspired by the gap between that need and what a few organizations can do to support entrepreneurial women that she decided to take further her action. “There is no organization promoting wellness and the acknowledgement of pain – from sexual atrocities to pressures at work, from sexual abuses to struggling with a husband, or struggling to have a husband.”

The association works through coaching, workshops, seminars and conferences. With a light team of 5, three women in different areas in the world and two technicians in Casablanca, Morocco, helping with the online side of the activity, it has already reached 2000 women, mostly young professionals aged 27-37. The seminars and one-to-one coaching sessions address the impact one can have, the relation between personal and professional life, vision and goal setting methods and work on leadership qualities.

Her dream is to reach out to millions of women in Africa, North America and the Caribbean. The mission is not focused on therapy, but self-development. “You can’t give what you don’t have, she says: your own strength, peace of mind, trust to your intuition and discernment. Young women are constantly shutting themselves down because they are told they’re not good enough.”

After all, Chidiogo knows her subject inside out. Her late mother, the multi-awarded pharmacist Dora Akuniyli (1954-2014), is an icon in Nigeria. She was the uncompromising head of the National Agency for Food and Drug Administration and Control (NAFDAC) between 2001 and 2008. As the Director-General of this regulatory agency, “she wouldn’t take bribes and did what no man could ever do: she changed the rules of the game for operators in the food and drugs industry in Nigeria”. Recipient of the Integrity Award of Transparency International in 2003 and named “One of the 18 heroes of our times” by Time Magazine in 2006, she was the Minister of Information and Communications from 2008 to 2010 in Nigeria. Chidiogo, who has five siblings, is currently writing a book about her, to inspire others.

French-speaking, against all odds

As for her own trajectory, it is already telling. She decided to study International Relations & Economics at SAIS, John Hopkins, and French. These two subjects were “broad enough to figure out later” what her options could be. She was eager to understand the world and human interactions, and get the skills she felt insecure about not having. That’s why she chose International Relations instead of Law, recommended by her parents. But why French? A big revenge on life: she had a negative experience with a French teacher who slapped her in class when she was 11.

“I internalized the story I was not smart enough for French and put up a wall, thinking this is not for me. When I was 17, my sister had this crazy idea for me:  spend the summer learning French in Vichy. I was excited, and two months later I came back speaking French, because the teacher focused on me when I was crying in class, and I was living in a family whose children didn’t speak English.” She spent a year in Germany and learned the language, and then moved to China, where she worked on her undergraduate piece on China and Africa. She came back speaking Chinese, which she believes is an “important language to understand, so that colonization doesn’t happen again”. Now aware of her gift at learning languages, she went for a year to Bologna, Italy, for her Masters, and then to Mexico for six weeks, adding Italian and Spanish to her skills.

She has already been named among the 100 most inspiring women in Nigeria by The Guardian, an acknowledgment of her commitment towards the African woman’s cause. She is also a World Economic Forum Global Leadership Fellow, and an Associate Fellow of the Nigerian Leadership Initiative.

Now based in Canada, she travels a lot and keeps going to Nigeria. When asked about her hometown, Enugu, located in a region formerly known as Biafra, she immediately answers: “We never talk about the impact of the Biafra war, that killed 2 million people between 1967 and 1970. A lot of the challenges in Nigeria have their roots in this unaddressed aftermath of the civil war”. One more good reason to work on the rise of strong women is “not allowing anyone to tell them who they are”. Chidiogo Akunyili is convinced that female leaders have the ability to change the world.